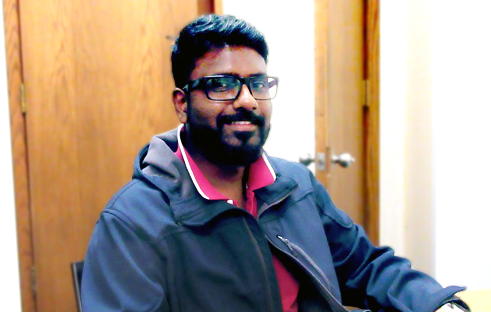 Things can be difficult when one is born into a family that has a “tradition” to uphold. There are often expectations, standards of behavior and levels of success that may be difficult, if not impossible, to meet. Whether the parent or close relative is an accomplished artist, scholar, athlete or religious leader, comparisons - and accompanying successes or failures - are inevitable

A native of India, and second-year Unification Theological Seminary (UTS) student, Manoranjan Samuel Dennis, is such a person. Samuel, as he prefers to be called, comes from a long line of reverends in his family line, including his grandfather and an uncle in the Bronx who is a reverend in the United Church of Christ (UCC). However, instead of seeing this as a stumbling block, Samuel has used this family “tradition” to spur him on to higher goals and levels of success.

“There’s been one thing consistent from the time I was a teenager,” said Samuel, “and that is I was always a member of the church. That was always consistent. Not only my church, but I was also active in two other ministries. I was helping out in leading worship and in ministerial programs; reaching out to Hindus and doing ministry for the poor.

“This was apart from my regular Sunday service. I did this consistently all through my youth and my college years. So, I thought it was high time I did something and I went ahead and made my application. I said to God, ‘if this is your will, let it happen,’ and things just worked out.”

Despite the family tradition and activism in the church all through his adolescence, Samuel earned a degree in Aircraft Maintenance Engineering, a professional degree, in his native India. Unable to find work in his field, he took a job with Lloyds Bank, the famous English banking firm, in his hometown of Bangalore. He stayed with the bank for two years, but his desire to study religion never abated.

The education here [at UTS] and the subjects we study, the perspectives on religion, on the Bible, on God, those are surprising to me. Those are things I never heard before. Those things that are always in the back of our head, those things in life that happen, philosophical questions that you always had about life."Manoranjan Samuel Dennis, UTS Student

Now finishing his third semester, Samuel’s experience at UTS has been beyond anything he could have imagined. The knowledge gained and the lessons learned have not just been eye-opening, but transformative.

“I grew up learning and knowing what was taught from the pulpit,” said Samuel, “and that was all I knew about Jesus Christ and also other religions. When I came here (UTS) things were really different.

“There are so many things I’ve learned that mean so much more to me; God means something else to me completely. Everything I knew about God is deeper right now, and there’s so much more I’ve learned about other religions and my own religion.

“Also, my whole perspective has changed. Not just about God, but about everything. This all came about gradually. Each semester I chose courses randomly, but each course I took spoke to me personally. Even though I chose them randomly I felt there was a divine intervention.” 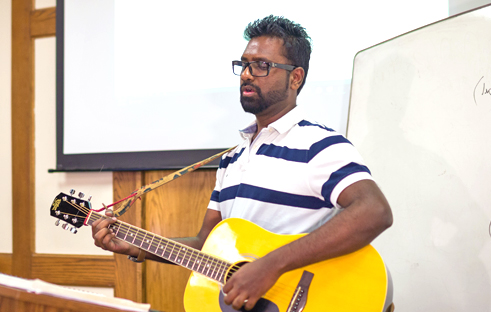 “The education here and the subjects we study, the perspectives on religion, on the Bible, on God, those are surprising to me,” said Samuel. “Those are things I never heard before. Those things that are always in the back of our head, those things in life that happen, philosophical questions that you always had about life.

“You come here and you have these questions spoken openly and brought into the light. You don’t necessarily have an answer to all these questions but they are addressed. It’s not more academic that I’m learning here, it’s more personal. It speaks to me.”

Although Samuel, like many who feel called to ministry, is “looking to see what God wants me to do,” he has a strong desire to carry on with his music ministry.

“For the past two semesters here at UTS I led the chapel service.” explained Samuel. “I play the guitar and sing, which I like to do very much. I also play the piano and sing. That’s another blessing I got from church, friends taught me how to play and sing.”

Whether Samuel continues with his ministry here in the U.S. or back in his home country following his graduation, he knows the answer will come through prayer.

“Whatever God wants me to do, I’ll do,” said Samuel, “and when that time comes I’ll just go for it.”